I’ve had Felicia, since I was in 9th grade.  I love her;  I’m 54 years old, and haven’t played her in 6 or 7 years.  I no longer have the breath.   But I just couldn’t let her go. I considered selling her.  That felt too much like selling a child, not done. I considered giving her away.  Nope, just could not do it. So, she sat in my closet.  And I moved several times, okay 4, if ya want to be picky, since I decided I needed to release her.  But still, she was with me, in her pretty light brown case, with the 70’s stickers on it. 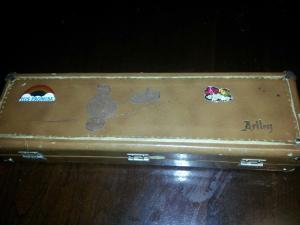 She’s an Artley!  Real silver! She was MINE. Then, my niece started playing the flute.  Nice, maybe we can play a duet.  Ha ha ha ha.  (Barely even have the breath to laugh that hard!) Suddenly, her flute developed a problem.  She needed a replacement flute.  Sis asked if she could borrow Felicia. Sure, she can “borrow” her, understanding that I want her back! Ah-hem.  What happened to de-cluttering? A little voice whispered in my ear.  I brushed it off, refusing to even dignify that question with an answer. Now, my niece’s birthday is coming up;  and I have no present for her.  Except, she already has my flute, that she needs, and is using.  And that I haven’t even had out of the case in more than 4 years…… So, fine, she can keep the flute, I thought grudgingly.  After stewing on it a few days, I realized, she will get more use and pleasure out of it, than I ever will again. On her birthday, I called Kristen and told her that Felicia was her gift.  She was thrilled! And my Grinch heart grew 5 sizes.