I think I’ve been bi-polar most of my life.   I just wasn’t diagnosed until my 30s.   Even when I was young, I’d think the strangest things, but when I tried to talk about them, I’d get looks like I had 3 heads.   So, I’d shut up, knowing I was weird.  And that I better keep all that was whirling around in my brain to myself, or else.   I wasn’t quite sure what “Else” was, but I knew it wasn’t good.

I was made to feel that I was out of step with the world.   That something was wrong with me.  I knew I was different, just not sure why.

One day I’d be happy as a lark, playing, and smiling all over the place.   The next, I’d be so blue, It seemed my world was ending.   Nobody else seemed to have such intense emotions, and extreme reactions.

Joining drama in college, and my first year after, was fabulous!!    I was TOLD to be an entirely different person!!    It was just what I needed!!   You are REQUIRED to be larger than life!

As I look back on it, I’m not sure why I never was involved in drama before then.    After I married Ranch Man, I tried to join the drama troupe at a big church.   I was politely told “We don’t have many roles for middle aged women.”   And the very next Sunday, who was starring in the production??   A woman my age!!   BUT, she was NOT FAT.   Yeah, being mental AND fat made my life so very pleasant.    {Sarcasm carry thru there??}

Now, I’ve seen that kids as young as 7 have been diagnosed bi-polar.   How would that have affected my growth, and development if I had been as well??

Sometimes teaching helped, a little bit.  When it wasn’t driving me to another nervous breakdown.   (I had a total of 3 while teaching between 2005-2008.   That’s why I’m on disability now.)

This bit of crazy was school sanctioned, because it was “Upside Down Day” at the Preschool where I taught Kg, in 1992-1993.   It was fun!   A little hard to walk, since the dress straps were between my ankles, but hey!   Anything for the kids!

Even now, some people can’t seem to deal with me.   “Sit down, and shut up” has been inferred many times.   “Quit being so dramatic about everything”  is another frequent refrain, ringing in my ears.   “You laugh too loud.”   “Stop being like that.”    “You can’t just let out a scream like that, we live in an apartment, there’s people all around.”   “This is church, restrain yourself, you’re singing too loud.”   “You’re embarrassing me.”    “You can’t dress like that, if you want to go with me.”   All this – even AFTER I grew up!!    I was an adult!

And I’m only being myself.   It’s not like I’m picking my nose in public!   I’m just talking to the waiter, like he’s a friend.   Or, waving to a baby, and making faces.   Or, asking for a Sprite with 3 different flavored syrups.  Or horrors, hugging my aunt/cousin/best friend in public!   How dare I??   Or squealing with excitement, when I’m opening a present.  Or wearing shorts without shaving my legs.

For awhile, several years ago, I just stopped feeling.  I stopped reacting.   I quit joking, or laughing in public.   Didn’t sing until I was alone in the car.   Why do it, when I’m just gonna be bopped on the head like Whack-a-mole??

Exactly, except I was ALWAYS whacked, never missed.

I hated being me, and wanted to just die. Some people approved of me.  “You’ve finally grownup!”   “You’ve learned how to behave!”    “You aren’t embarrassing me anymore!”

But then, they finally started asking me, “What’s wrong?   You don’t talk anymore.   That’s not like you.”

Well, duh!!   I wasn’t being me, because “me” was always wrong!   Easier to just exist, instead of trying to live.   Being constantly beat up, verbally and emotionally, takes a tremendous toll on a person.   Especially since I already had mental and emotional problems to start with.

Now I have a select few, very few, people I can be myself with.   But I can’t always be around them.   So, I have to modify  ( read- completely change) my behavior to suit the company.   And that’s a strain.   For about 6 months, last winter, I told my counselor every week, “I’m so tired, I’m just so tired.”   I wasn’t able to be myself, because my few people were too busy, or our schedules didn’t sync.   For whatever reason, I was having to sustain my modified behavior, without a break, to let loose and be myself.  Talk about bi-polar!   It feels like having to maintain a totally different, unnatural personality.   Like being in a straitjacket, and muzzle.  Yet, still expected to talk, and “Be normal”. 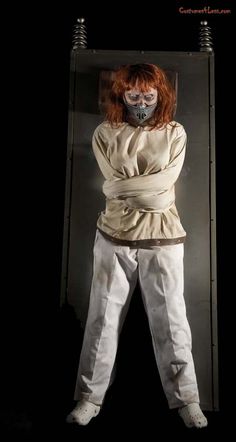 Is that too much to ask??