Nope, it wasn’t the soap that was silly, it was me.  Shock, shock, right??

Remember last year when I was pontificating about being too old to use broken, ugly stuff??

Well, then what was the justification for this???

Um, straight up laziness, is all I can plead.  No excuses, especially since I’m even older than when I wrote that!

Even worse, look at the counter.  Shameful, shame I say. 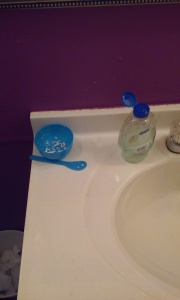 Shock and horror that a slob would have a mess!

And nobody to blame but myself.   So annoying!   Sometimes, I regret living alone!  At least when 1 other person lived with me, I could always delude myself that everything was their fault!  (Even when it wasn’t, as was usually the case, if I have to be honest.)

There, now isn’t that better??

And it took all of maybe 60 seconds to pour the soap in it, and recycle the bottle.  Take that, laziness!

I even took a few extra seconds, to wipe down the counter and throw away the bowl.  (Yes, it’s been sitting there for over a month, and…..?  The point is, it’s gone now.  Just be happy.) 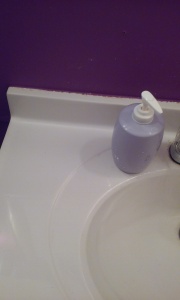 So, so pretty!  Thank you, Jeanette, my neighbor for the lovely lavender soap dispenser.  (She doesn’t even like purple, of any shade.  GASP!  I know!  I feel sorry for her too!)

I worked in the bathroom again.

The right drawer was frightful.

I probably could have stocked a small pharmacy outta there!

Here’s what I purged:

Don’t worry, it was donated, not trashed. 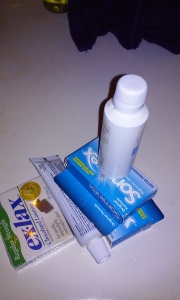 But, here’s the good part: 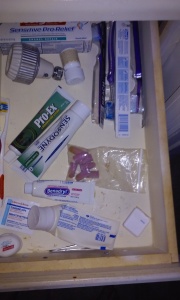 Looks so much better.

Then it was the medicine cabinet’s turn.

This is my medicine cabinet. 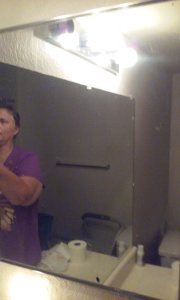 I know, the mirror in a mirror thing freaks me out too!

This is my medicine cabinet on drugs. 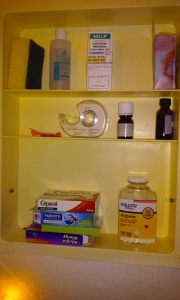 Really doesn’t look all that bad.

Here’s what I purged:

Donated to my Sis.  She loves Olay, I don’t.   Yes, I got it back in my couponing days.

So, after all that purging, what could possibly be left? 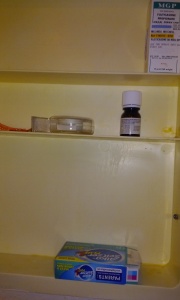 Looking good! (If I do say so myself.)

Remember not long ago when I boasted about my superb sewing space?

Not changed at all

In the continuing effort to pare down, by purging, I gave up the nice big gray cabinet, which was wonderful for storage.  Purging  it caused a twinge of angst, but only a small one.

Then, Brother needed more room, so his ginormous bean bag somehow ended up in there.

Hmmmm, how exactly did that happen?    That thing is heavy!

Then someone gifted me with a huge bag of fabric for quilting.  Who could turn that down? Not I!

And just when the storage cabinet went away too.

So, once again it’s a slobby sewing space.  sigh  And here I had been breaking my arm, patting myself on the back that I was making progress.

So how much does it count to have gotten rid of 1 huge thing, when it put the whole room straight back into chaos again??  See how I blamed the cabinet’s absence for the mess, instead of admitting it was me?  Pretty slick, right?

Posted on these Parties.