It was always assumed we 3  kids would go to college.   Were you breathing?   Yes, sir.  Do you intend to remain in that condition following graduation?   Yes, sir.   Then you’re going to college.    (Maybe it was never stated verbally, but trust me: it was implicit in their eyes, whenever it was time for report cards!)

Also assumed, was WHAT college, A BIBLE college, for course.   And WHICH Bible college was therefore predestined: Southeastern Bible College of the Assemblies of God.   (We called ourselves SCAGites, isn’t that a lovely image???)   By the time Brother got there, (AFTER I graduated in 1983, Sister in 1993, and MAMA {Go, MAMA!!} in 2003) it was SEU, Southeastern University.   We’d come a long way, baby!   AS you can tell, since he’s older than Sis, he’d taken a detour on the way there.   Barely survived till then too, since our dad nearly skinned him alive for declaring. “I don’t WANT to go to college.  I’ll be happy as a manual laborer.   {Aha! NOW I remember why we called him Manuel!}

So, I dutifully went to college.  I really loved school, so I was looking forward to it.   AND bonus; I got to live in the dorm!!!!   Woo hoo!! Par-TAY time!!   All my  life I had been a good church girl.   Well…. mostly!   I was still a virgin, never did drugs, (Unless you count caffeine!) and obeyed my parents (usually).   I didn’t even sass back…. unless you count eye rolls, and tongue sticking-out-behind-their-back, which they ALWAYS totally busted me on!   How do mothers DO that??   ( I found out when I became a Mom.   It’s a superpower God gives Moms.)   So, anyhoo, I was looking forward to the freedom of being on my own.   Yeah, right!!   SEBC  thought they were our parents!   Just without the Mom superpowers.

So, I did a few minor infractions, but stayed on the Honor Roll.   But the school never gave out 5 dollar bills, like the REAL parents did!! 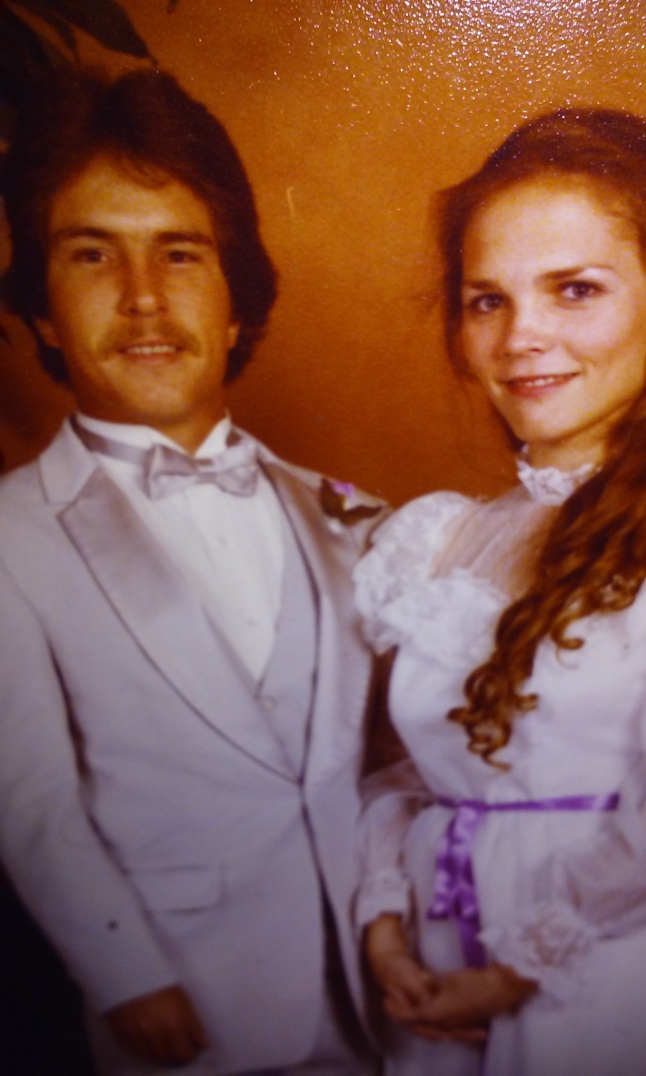 (Allen C, my senior year boyfriend, and I at my Senior Banquet.   I pretended this was our wedding photo!!   What??  He had on a tux, and I had on a white dress!!  I had a vivid imagination, yes!)

Okay, now I’ve totally lost my entire train of thought for this post….

Something about going to college and meeting boys, was what I originally thought I was gonna write about.   Oh, well.  Hope you enjoyed this peek into the past!

Next time I’ll try to stick to the point!